Greetings all, and a Happy New Year!
Usually the UWA sessions come back at the end of January/beginning of February, but due to popular demand we’re going to be starting back on Jan 12th.
As a celebration of the new year and all, the sessions on January 12th and 19th will be $10, down from the usual $15. There won’t be a session on the 26th due to it being Australia Day. When we come back February 2nd it’ll go back up to the normal rate of $15.
On the 12th we’ll be having in Sarah 2 (the newer one we had towards the end of last year) and on the 19th we’ll be having in Trent.
For those of you needing your drawing fix sooner, the Floreat group starts up again this week (Wednesday 7th).
Cheers

Good evening all, sorry again about the late update (I do not know where the weekends keep going).

Tomorrow night (the 22nd), we’ll be having a solo session with Nicola. Well, I say a solo session, but the model who I booked in last week on short notice for a cancellation but no-showed us may turn up thinking that I had intended to book her in for this week. I don’t know as I haven’t been able to reach her. It’s like a a box-o-chocolate life drawing session, you never know who’ll turn up! (I jest, I always feel bad when a model doesn’t turn up so I do apologise for that.)

There will be no session on the 29th due to the public holiday (Labour day in a Liberal state? How can that stand?).

When we return on the 6th, Sebastian will be running the session for me (as I’ll be recovering from running the 24 Hour Comics Day event the weekend before). The models for that night will be Amy with Trent.

And the following week (the 13th), we’ll be having in Victoria who is back in Perth. The first hour will be nude drawing, and for the second hour Victoria will be wearing some of her Moulin Rouge finest. This should be something to see.

Good morning all,
I do apologise for the delay in getting this to you, it has been a crazy week.
For tonight’s session we are having Trent as our model. Hopefully some of you will be able to make it (I have already been contacted today by someone wanting to make sure that the session is still on).

We’ve been having a a couple of slow weeks at the UWA group lately, which is a bit of shame as people have been missing out on some great models with Chloé and Travis, but understandable given the weather.

Just a reminder that Chris’ art show I posted about the other week will be opening this Friday at ArtLaab. So if you’re looking for something to do on Friday night, head one out to look at art and have some drinks. Here’re the details: 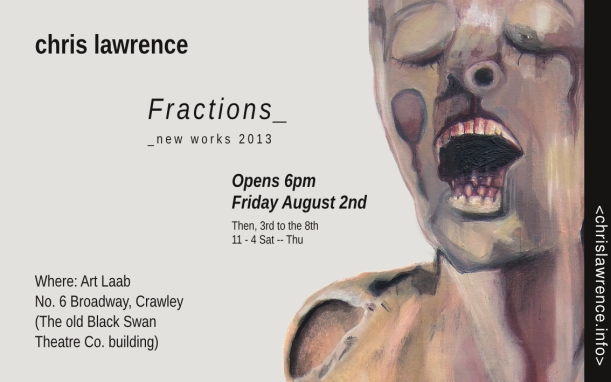 I’ll be back on Aug 19th, happy drawing till then people.

And now images from over the last month or so:

We had a busy session last week and a quieter one this week, but that’s the way it goes. Pictures are below (and I must say that I am getting really bad at taking pictures, I think I need to stop just walking up to take one and actually stand still for more than a couple of seconds) from the last two weeks.

There is no session this coming Monday, June 3rd. This is due to the public holiday. We’ll be back on June 10th with newcomer Alicia, followed on the 17th by Trent who we have had in once before if I remember correctly.

Now for something a bit different:

I mentioned a couple of weeks ago about the art show that one of regulars, Tom, will be having. Well that is opening tonight (The 31st) @ 6pm, feel free to head on out. 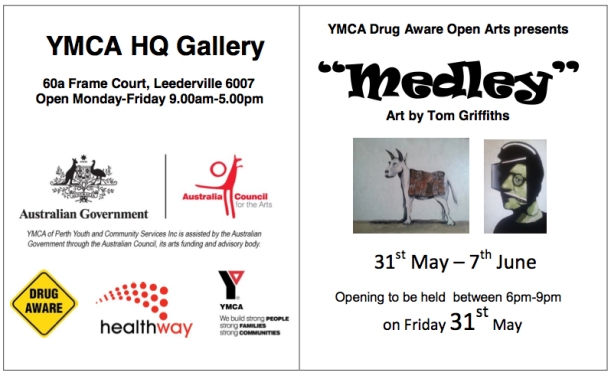 And the 3rd year BFA students at UWA are having their end of year show next week. Although the exhibition starts on Monday, the actual ‘opening night’ of the show is Wednesday, June 5th @ 6pm and it conveniently located in the gallery next to our drawing space (and is the one we held our drawing show in earlier in the year). I’ve been seeing their work build up in the studio over the semester as I’ve been working on my Honours stuff and there are some really nice pieces that will be going up. I should also mention that this will be the main show for the year as most of the students are graduating after this, at the end of the year there will be only about three or four 3rd Year students exhibiting, plus two Honours students (of which I will {hopefully} be one). The invite is below.

Also, I’ve recently found out about some interesting art competitions that caught my eye and that some of you may be interested in:

First up is the Black Swan Prize. Enteries are currently being accepted and will continue to be so until July 12th. It’s open to just about every illustrative medium, but excludes digital media and has some good money attached to it. (Note that this competition does require an entry fee for your work.)

Secondly is a new one in celebration of the Square Kilometre Array called Seeing Stars SKA Art Prize 2013. Like the Black Swan Prize, this one is open to most illustrative mediums, but excludes photography. Prize money isn’t as good, but there is no fee to enter and the theme is awesome. Open until July 5th.

Thirdly, and lastly, since the previous two exempt photography, here is one that is purely about using a photog-machine; the Fremantle International Portrait Prize 2013. Open until July 8th, this one also has a small entry fee.

I have been slack in updating the pictures, so here’s a bunch from the last four sessions! And one last reminder that there is no session on March 4th.

Greetings all, we’ve had a fantastic first two weeks back at UWA with a whopping 18 new faces between the two sessions! Thanks to everyone who has been coming out (the room may have been a bit tight last time, but we made it through!).
We had Lucy the first week, and a new face for us, Trent last time (pictures will be coming in the next few days), next week we have a one-off treat of a Kiwi model by the name of Richard who will be in town just for the week, so that will be fun.
Cheers!